Business performance
Past results and forecasts for the current fiscal year.

As parts supply constraints continued due to the global shortage of semiconductors throughout the year and the spread of the coronavirus in Southeast Asia during the second quarter period, operations at the Company’s Japanese and U.S. manufacturing plants were affected by production adjustments and temporary suspensions. As a result, global vehicle sales decreased 14.7% to 734,000 units. Overseas vehicle sales fell 15.0% to 645,000 units, while vehicle sales in Japan dropped 12.1% to 89,000 units.
Consolidated revenue decreased 3.0% to 2,744.5 billion yen.As the higher costs of raw materials and the decline in unit sales more than offset the positive impact of the reduction in sales incentives, the decrease in warranty expenses, and the effects of foreign exchange rates, operating profit decreased 12 billion yen to 90.5 billion yen, profit before tax fell 7 billion yen to 107 billion yen, and profit for the period attributable to owners of parent declined 6.5 billion yen to 70 billion yen.

We compensated for the impact of the decrease in unit sales mainly by reducing sales incentives, revising selling prices, and increasing the high-profit models in the sales mix. Although exchange rate fluctuation was an increasing factor, the sharp rise in material cost, etc. had a significant impact, bringing operating profit down 12.0 billion yen year on year.
U.S. sales incentives per unit were down 600 dollars from 1,300 dollars in the previous year to 700 dollars, bringing the total amount of U.S. sales incentives down 45.6 billion yen. 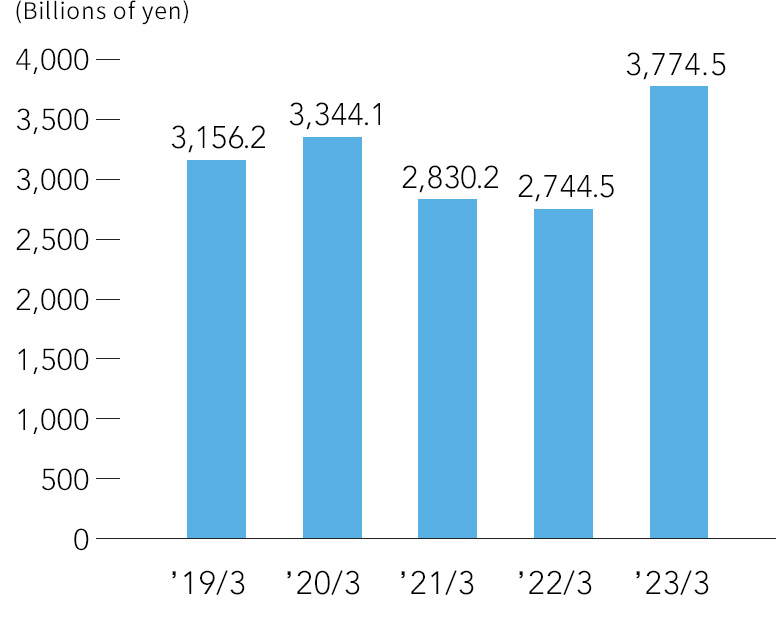 * The Company is voluntarily adopting International Financial Reporting Standards (IFRS) for its consolidated financial statements from the fiscal year ending March 2020 (FYE2020) in place of the Japanese generally accepted accounting principles (JGAAP) previously adopted. The first-quarter and full-year result figures for the previous fiscal year (FYE2019) have been recalculated based on IFRS for comparison and analysis purposes.

In fiscal 2021, demand in the automobile industry was on a recovery track along with the economy. However, automobile production stagnated in various countries due to global shortage of semiconductor supply, which also affected sales. Overall automobile demand in the United States, our mainstay market, decreased from the previous fiscal year by about 4% to approximately 14.5 million units. Total automobile demand in Japan decreased by 9% to approximately 4.2 million units.
Under such business environment, supply constraints of parts procured from business partners continued and we also had to adjust production and temporarily suspend operations at our plants in the U.S. and Japan. Consequently, overseas and domestic unit sales decreased year on year by 114,000 units (15.0%) to 645,000 units and by 12,000 units (12.1%) to 89,000 units, respectively.
This resulted in a decrease in combined overseas and domestic unit sales by 126,000 units (14.7%) to 734,000 units. Revenue decreased by 60.0 billion yen (2.2%) to 2,677.5 billion yen. Segment profit decreased by 16.5 billion yen (15.2%) to 92.5 billion yen.

In prospect of a recovery especially in its key North American market, Subaru projects consolidated global vehicle sales of 940,000 units.
While uncertainties surrounding the semiconductor shortage remain, the Company, incorporating the expected positive impact of the increase in vehicle sales and effects of foreign exchange rates, projects consolidated revenue of 3,500 billion yen , operating profit of 200 billion yen , profit before tax of 200 billion yen , and profit for the period attributable to owners of parent of 140 billion yen .The projections are based on exchange rate assumptions of 120 yen to the U.S. dollar and 130 yen to the euro.

The main factor behind the increase in profits is sales volume & mixture, etc., and we anticipate an improvement of 236.5 billion yen.
In addition to a 164.7 billion yen increase from the 206.0 thousand unit increase in consolidated unit sales, we also expect an increase of 90.6 billion yen from an improvement in model/grade composition and revised selling prices.
On the other hand, due to skyrocketing material cost, etc., including for steel and precious metals, we anticipate a year on year decline of 104.2 billion yen.
This assumes a roughly 8 yen depreciation of the yen against the U.S. dollar.
Factoring in rising interest rates, we also expect U.S. sales incentives per unit to increase 200 dollars from 700 dollars in the previous year to 900 dollars, bringing the total amount of U.S. sales incentives up 33.3 billion yen.

Next : Path to Further Growth